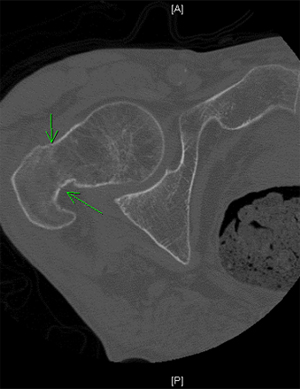 By definition, plain film radiographs are negative in occult hip fractures. The physician has several options.

According to the majority of authors, MRI is the study of choice, with 100% sensitivity and specificity reported in prospective studies evaluating its use in diagnosing occult hip fractures. MRI also has the advantage of being able to detect alternative causes of hip pain.

CT is a popular choice due to accessibility. Limitations of CT include that it can miss small impacted fractures or nondisplaced fractures that run parallel to the axial plane.

Radionuclide bone scanning has reported sensitivity of 93% and specificity of 95%. However, scans may not be positive until 72hours after injury.