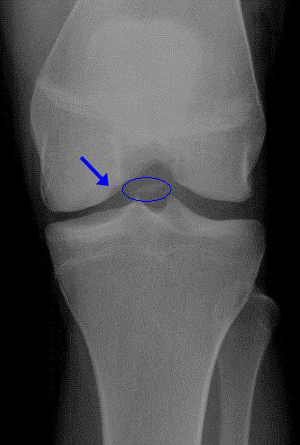 Plain radiographs of the knee are usually sufficient to identify advanced or large lesions. The donor site from which the foreign body originates is usually seen as a crescent-shaped luceny on the lateral aspect of the medial femoral condyle (the most commonly involved site). A notch-view or tunnel-view of the knee may aid in the detection if clinical suspicion is high—this is an AP view taken with the knee in 45 degrees of flexion to better visualize the femoral condyles. Comparison views of the opposite knee are suggested, both to ensure that the lesion seen isn't an anomalous ossification center and because 30% of cases are bilateral.

Bone scans were previously used for early or subtle lesions, but have been largely replaced by MRI, which has equivalent sensitivity but increased prognostic value.